Article about Dr. Frank Smith in the FORSYTH NEWS 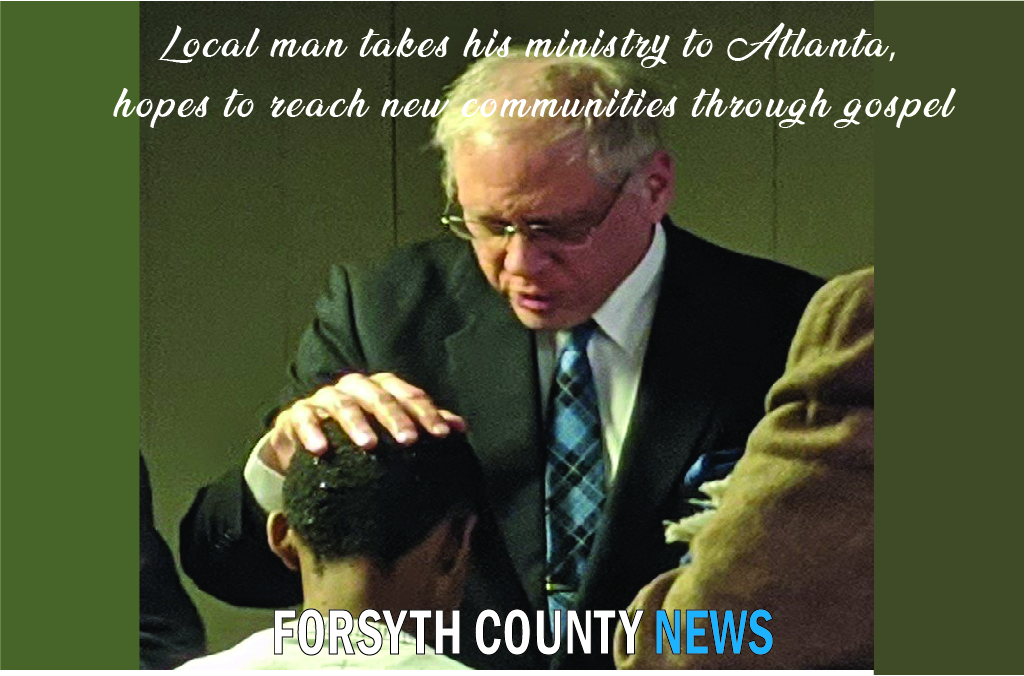 Article about Dr. Frank Smith in the FORSYTH COUNTY NEWS

Before his start in ministry in Atlanta, Smith put down roots in Forsyth County around 12 years ago. He had been directed to help minister the gospel in suburban areas, but he was also teaching history classes at two different colleges part-time: Georgia State University Perimeter College and Atlanta Metropolitan State College.

In March of 2009, Smith said that he sat down for lunch with one of his friends, Dan Wolf, a Realtor in Forsyth County. During lunch, Wolf asked if Smith had ever thought about branching out in his ministry.

“Wolf [asked me if I had] a vision for reaching out to the Black community in Atlanta and I said yes.” Smith said. “And [Wolf told me to] ‘Do it, man. Do it.’ If you’ve seen the movie ‘Amazing Grace’ where the aged John Newton, who wrote the song ‘Amazing Grace,’ says to Wilberforce in terms of trying to get parliamentary legislation with regard to the slave trade, ‘Do it, man. Do it.’”

Smith said that Wolf’s encouragement was all he needed to start a Bible study on the campus of Atlanta Metropolitan State College. Unfortunately, as the weeks passed, Smith was not seeing the traction that had been hoping for.

Being a resident of Forsyth, Smith’s daily commute into the inner city consisted of the Marta train and a bus ride. On one of his bus rides home, Smith met someone that sparked inspiration in him.

On April 4, 2009, Smith met a Black woman named Mary who lived in the Bluff. He said that what caught his eye was that on the bus, Mary was reading a devotional book. He engaged her in conversation and told her he was a professor but that he also worked in ministry. He said that when he mentioned he was a minister, “[Her] eyes just lit up.”

“She said … ‘Oh, I’ve just been praying for someone to teach me the Bible,’” Smith said.

Smith followed Mary as they hopped on the train back home and before Mary could get off at her stop, he said she turned to him and uttered words that would, unbeknownst to him, change his life.

“She said to me, ‘Don’t forget the least of these,’ quoting Jesus’ words from Matthew 25,” Smith said.

The very next day, Smith had lunch with Wolf again and conversation once more steered towards Smith’s ideas for reaching out to the population in the inner city with his ministry.

“Without knowing what [Mary] had said, he told me: ‘Well you know Frank, we must remember the least of these,’” Smith said. “I mean, talk about getting a message, right?”

Smith said that he and his wife moved their Bible study sessions to a few different locations around Atlanta after that, but as the months passed by, Smith said he saw fewer people attending, especially through the winter months. Smith said that even Mary “became spotty in her attendance.”

In early 2010, almost a year after he had started his Bible studies, Mary returned and said, “I’m going to take you to the Bluff. Get in the car.”

Smith and his wife were unfamiliar with the Bluff, but as Mary directed them through Atlanta, they began to understand where they were headed.

Smith said that Mary told him to stop at a four-way intersection where an old African Methodist Episcopal (AME) church was located. The church didn’t have a roof, as it had previously caved in. But the four walls of the structure were still standing, along with the steps leading up to it.

“We would find out later that [the] intersection was one of the most dangerous intersections in the country,” he said.

Smith and his wife got out of the car and began to meet some of the “folks milling about the intersection.” Smith said that as soon as he stepped into the intersection, he noticed that everyone “knew Mary and just loved [her].”

“I just remember her telling everyone at this intersection, ‘We’re going to have church here, next Sunday at 5 o’clock. Right here on the steps,’” Smith said. “And that’s how we got introduced to the area.”

Smith said that through the years, he has lost touch with Mary, but he was still thankful for her helping him find the area and being an “in” to be able to connect to the community.

“As I tell folks all the time, we didn’t select the area,” Smith said. “God selected it for us.”

For two and a half years, Smith held Bible study on the steps outside of the church with a whiteboard to illustrate his lessons. One day, a man who owned a shop stopped by to see what was going on. Smith said the man was impressed and immediately offered to open his back end of the store for Bible studies.

Smith said the back of the store didn’t have electricity, but it at least had a roof so they could continue to worship “away from the elements.”

Smith started weekly worship in the back of the man’s shop in 2012, moved to two churches, and then one side of a duplex. Recently, he said that the church has been meeting in an old broom factory about four blocks from the Georgia World Congress Center, right at the “intersection of the haves and the have-nots.”

After the initial introduction to the community of the Bluff, Smith said that residents were wary of him and his wife, but soon found that they were “just too naïve to be undercover cops or something like that.”

He said that within a few months, there was a sense of respect that had blossomed between him, his wife, his volunteers and residents of the neighborhood.

“We were told one time that if the drug kingpin of the area had not wanted us there, he would have driven us out,” Smith said.

But as they continued their ministry, Smith said that the church “became part of the landscape.”

Being a bit of a “railroad fanatic,” Smith said he liked to often wear an engineer’s cap. He quickly became known as “Railroad Man” within the community and by people he didn’t know.

Smith said that while he has ministered in New York, Virginia and suburban areas all around, ministering in the inner city of Atlanta is “a lot easier.”

“In the suburbs, sometimes people put up a façade,” Smith said. “Everything is … individualistic. In the city, even though it is a broken community, it’s still a community. Everybody knows what’s going on and who people are.”

Smith gave an example, saying that even though he and his wife have lived in Forsyth County for 12 years, they didn’t know their neighbors that well.

“We know them enough to say hello and things like that,” Smith said. “But we don’t know what’s going on in their lives. We have no clue. But that’s just how people are in the suburbs.”

Smith said that in the suburbs, people sometimes have certain expectations “for what ministry is and what it’s supposed to look like.” But in the city, “you can just be yourself.”

“It’s a freeing feeling,” Smith said. “To just tell the gospel like it is as Railroad Man.”

He has recently been elected as moderator within his presbytery, Reformed Presbyterian Church of North America, that stretches from Michigan to Florida.

Smith said his moderator duties are “to be as fair and neutral as possible” at meetings between members and to help facilitate debate and discussion. The moderator position is a year-long term.

For the future, Smith said he sees himself continuing to minister in the Bluff.

“As the Lord gives strength and stamina, I would say that for the foreseeable future, this is just where my ministry will be,” Smith said.

“When people have been reconciled to God, they’re going to be reconciled to each other,” he said. “And I think, given what we’re seeing in our country today with the stirring up of racial hatred and strife — which I am very concerned about these folks who are deliberately stirring up strife — we always need to come with a message of love and hope and oneness.”

Smith also encourages any residents of Forsyth County that are interested in his ministry to come to the city to see what they are doing in the community. He said he also appreciates any donations or volunteerism that people feel compelled to offer.